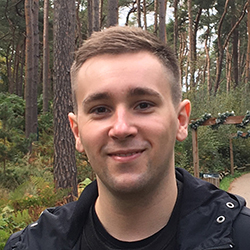 A story no parent should have to tell

No one saw it coming, not even the doctors that provided a phone appointment during the 2020 lockdown.

It was something so preventable, and fixable, had we known. Our son torn away from us. Louis’ mum, Lesley, and I are totally devastated.

What happened? We still cannot comprehend how Louis had gone from fit and healthy gym-goer to losing his life. Even typing that sentence was so very painful.

Late in May we ordered ourselves a takeaway as a 2020 lockdown treat. Louis, in grand style, ordered a cheeseburger and chips and chicken nuggets on the side! I remember joking about how glad I was we weren’t getting regular takeaways or he would end up with a ‘lockdown belly’. Louis decided to take his meal to his bedroom where he could eat and relax watching Netflix or similar. My wife, Claire, and I echoed this in the living room where we settled, with plate on lap, to watch tv.

Of course this was now May and Louis had been furloughed from work for quite some time. With not much to do, no regular gym trips after work, no regular walks on the way to and from work… boredom inevitably settled in. No one expected the lockdown to continue for so long. Fear of going out crept its way into households and Louis was no exception. Exercise for Louis was reduced to the confines of the home. Despite increased nagging from me and his mum, and subsequent arguments, he simply continued to slide into a sedentary lifestyle. From our perspective, we assumed he would be back at work, and his routine, in due course and we could put this behind us. In the meantime Louis, like countless other youngsters in the same situation, whiled away the hours at his computer, sometimes I would wake, maybe 6am, to find he was still up. I could hear him often chatting to friends online in the early hours, he clearly had company in his ‘new normal’ nocturnal lifestyle.

It was around this time that Louis had been complaining about a pain in his leg. He had pulled something! It was clear to me and his mum that it was most likely from not exercising, just sitting and playing video games and watching endless Netflix etc. I remember telling him, he’s pulled something, and to do some stretching and get out for a walk. Lesley, his mum, had suggested similar and as a pilates teacher, Lesley had even advised some relevant stretches. Later it was evident Louis’ leg showed some signs of swelling, not much but it was noticeable in comparison to his other leg.

The morning after our takeaway

I was up early, around 5.30am. I was in the kitchen making a coffee. I could hear Louis was up and in the downstairs bathroom. A few minutes later the bathroom door opened and Louis was sat on a step and called me to help him. I went over and asked what was wrong. He told me he had a stomach upset and bad diarrhoea and didn’t feel well. I helped him upstairs where he sat with a slump on his bed. As I was making sure he was ok he suddenly passed out. I panicked and shook him to wake him to no avail. I ran to to wake my wife for help. Returning to Louis’ room I reached to try wake him again and called my wife to phone for help. With a sudden startled expression, Louis woke and sat upright. Within minutes he was feeling somewhat better. We had now got the none emergency response on the phone and short time after a doctor called. Louis spoke with the doctor in my presence and I told him to mention his leg, which he did. Louis was quite versed on muscle names and informed the doctor he had pulled a particular muscle and although painful he was dealing with it. The doctor concluded from Louis’ description of symptoms; not feeling well, diarrhoea and even passing out, that he had FOOD POISONING!

Had the doctor joined the dots at this stage then this story would be very different!

Following the doctor call back I suggested Louis also try get an appointment with the local GP. I received a call from the local GP later that day. I wasn’t home at the time of the call but Louis reported that the doctor agreed with the previous doctor that it was most likely food poisoning. It is very likely Louis had relayed information to support this and unknowingly helped guide a mis-diagnosis.

Louis continued to complain about his leg for the next several days. He did, however, decide to get more exercise and eventually joined me and his little sister for a walk down to our allotment. The walk was painful on Louis leg and when we returned he said he just wanted a couple of days to rest it before he comes back out. I was pleased he had made the effort and his little sister, Zoe, was over the moon he had joined us. Later Louis had used ice packs on his leg and I believe he had taken some Ibuprofen. It did seem to be getting better.

PLEASE NOTE, I AM WRITING LOUIS’ STORY AS AND WHEN I FEEL STRONG ENOUGH TO DO SO. IT IS NOT COMPLETE AND IT WILL ALSO BE EDITED AS I KNOW IT IS GETTING LENGTHY.

Visit the Gazette online for a tribute to Louis